Australia is known for its landscape and flora. With more than thirty thousand plant species, the country’s flora is among its most prized assets. Among the plants are some pretty common ones, as well as the rare ones that can only be spotted if you know where to look. And, to know where to look, keep on reading for a list of the most beautiful native plants of Australia.

Acacia is just another name for wattle trees, also known as Australia’s floral emblem. The Golden Wattle grows in many parts of Australia, and it is generally a wildflower. Typically, it grows between four and eight meters tall. It is yellow, therefore the name “golden,” and its shrubby, bushy look is great for flower arrangements and other design options. The Golden Wattle is a part of the Mimosa family, which is known to be tropical and sub-tropical. Therefore, the mature plants are said to be relatively frost- and drought-tolerant.

The plant was proclaimed Australia’s national flower in 1988, and in 1922, September 1 was declared National Wattle Day.

Another emblem, this time of the Australian Capital Territory, is the Royal Bluebell. It became the floral emblem as a native to the region, which was the main criteria. Other features of this flower include horticultural merit and design potential—both as a natural flower and a stylized décor.

This small, blue flower is about 2-3 centimetres in length and diameter and the leaves are waved. The Royal Bluebell appears to be paler in the centre. The petals are blue with a hint of purple, but at the very stem, they are white, giving the illusion of different colour. The flowers, depending on the weather conditions, may be erect or nodding. Long, slender stems carry them.

Since it is the emblem, the Royal Bluebell is legally protected wherever it occurs naturally in the wild.

One of the many flowers Adelaide has to offer is Dallachy’s Banksia, a shrub native only to Australia. It can grow up to 5 meters and its interesting look is becoming very popular in the industry of freshly cut flowers. Its blue-grey, pointy-looking flowers are getting more and more popular, but in the past, they were popular for different use. The Banksia used to be picked for its medicinal value, even though it has never been proved that they actually have medicinal powers.

Dallachy’s Banksia carries the name of the first man who collected the flower in 1867, John Dallachy, who was working as a collector for Victorian Government Botanist Ferdinand von Mueller.

Currently, Banksia is used in the flower industry and the shrub itself is not considered endangered.

This flower is the floral emblem of Australia’s Northern Territory. It carries a lot of history in its name, given that is it named after an Australian explorer, Captain Charles Sturt, who was the first to notice and collect them during his journeys in 1844 and 1845. It’s related to the cotton plant, even thought it doesn’t resemble it. The Desert Rose is widespread in the tropical and temperate regions of the world.

By the looks of it, the Desert Rose is a compact shrub around 1 meter in diameter, with round or oval, dark green leaves. The petals have dark red centres but end in beautiful and delicate violet colour, having the most intricate contrasting look.

Sturt (or Sturt’s) Desert Rose has many names, some of which are Darling River rose, cotton rosebush and Australian cotton.

It likes to grow on rocky slopes and in dry creek beds, and if you go looking for it that’s where you’ll most likely find it.

This plant is the state flower of South Australia. The state adopted it as a floral emblem in 1961. Oddly, it was not named after the man who first discovered it in 1688, explorer William Dampier, but after the explorer Charles Sturt. He was the same man who discovered the Desert Rose, and in honour of him and his exploration of inland Australia, this flower got its name. The man who first discovered the flower is memorialized in its Latin name, Willdampia Formosa; Formosa means “beautiful.”

This slow-growing flower appears soft grey because of the fine hairs that cover it. It can grow up to 30 centimetres tall, and it stands upright on fleshy stalks. Its colour can vary from red to purple to black.

If you go out looking for this flower, go to the open plains and deserts, where Desert Pea grows the most. However, don’t pick it, since it is a protected species; you need to have a permit to collect it.

Western Australia’s floral emblem, red and green kangaroo paw, got its name because of its resemblance to the kangaroo’s paw. This odd flower is a low shrub that grows from an underground stem. Its leaves do not extend longer than 1.2 meters.

The look of this flower is quite odd, given how the stem and the base of the flower are deep red and covered with woolly hair, but then the colour suddenly changes. Most of the length of the flower is green, and it opens to show a smooth, pale green interior.

Red and green kangaroo paw blooms from August to October in Western Australia, when it is the warmest.

Australia has so many different native plants that are both rare and odd, and perfectly reflect the history of its growing place. We couldn’t mention all the native plants of Australia, because that would make this article a little too long, but we hope that you learned something new from our most interesting picks. 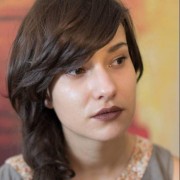 Alexis is a Sydney-based part-time lifestyle writer and a full-time mom of two. Her words carry the richness of her travelling and parenting adventures, offer advice and inspiration to those who desire to improve their lives. Outside of the office, she takes pleasure in spending precious time with her youngsters and absorbing the happiness they constantly radiate.

Beaches You Should Consider Living At