Not many people go traveling around Halloween, especially with their families, but that doesn’t mean you shouldn’t. Halloween weekend might be one of the most interesting weekends to travel; because you’ll be able to experience how different communities throughout the country celebrate Halloween. While you might think every town and city celebrates the day the same way—trick-or-treating, a raucous party downtown, a costume parade—you’ll be surprised (and a little bewildered) at the twists and turns that residents take in their celebrations. Want a little better idea of what you’re in for? Follow along and learn about some of the best US Halloween destinations to visit.

If you’re even in the state of Louisiana, you need to swing through New Orleans on Halloween weekend and head to the city park festival grounds for Voodoo Music & Arts Experience. Not only is it one of the city’s most popular festivals; but you’ll get the chance to learn more about the practice of voodoo while downing some of the best festival food you could imagine and vibing out to local bands in creative, one-of-a-kind outfits.

The thing to know about Halloween in Seattle is that Seattle loves celebrating Halloween with huge, popular events, some of which have an entrance fee, so be sure to bring your wallet. The festivities start in September, with Wild Waves Theme & Water Park’s Wild Waves Fright Fest, where you can ride in the dark, tour a 3D haunted house, test your bravery on the park’s haunted trail, and participate in the Nightly Parade of Ghouls & Freakshow Deluxe Hollywood Side Show. If you’re a fan of running and charity; you can put on a costume and join in the annual Run Scared event, whose proceeds go the Leukemia and Lymphoma Society.

The nation’s capital presents people of all ages with plenty of outdoors and indoor activities spanning and including aspects of America’s history, from trick-or-treating at Mount Vernon, the home of George and Martha Washington, and a once-in-a-lifetime sleepover at the Smithsonian National Museum of American History. The Black Cat, a popular venue on 14th Street NW, also hosts a Halloween Dance Party where you might run into some local celebrities; the same is true for the Nightmare on M Street costume party in the Dupont Circle neighborhood. While you’re in the city, be sure to take some quirky costume pics for your dating profile in front of landmarks like the White House, Washington Monument; and the National Mall.

Keep it weird, Austin. With Halloween events beginning as early as August with the Texas Chainsaw Massacre Film Tour; and running to a few days after Halloween day with Scream Hollow Wicked Halloween Park; you’re almost guaranteed to have a weird (but good) Halloween while you’re in Austin.

Sans-kids for the evening? Don a costume yourself and make your way to 6th Street for some heavily-adult orientated Halloween shows, specials, and some of the best meals to pair with your outrageous outfits.

Where to start with NYC? NYC is a city that pulls out all the stops for Halloween, so there’s no end to the amount of sights, attractions, and events you’ll have to choose from if you’re in the city for US Halloween destinations, including the Village Halloween Parade, Great Jack O’ Lantern Blaze, the numerous haunted buildings, bars with exclusive specialty drinks, live performances, and theme-nights at art galleries.

With such a sprawl of things to do in US Halloween destinations; your best bet is to narrow down your list to 3 or 4 activities. Be sure to buffer with a decent amount of time between them for transportation (and maybe an outfit change).

You won’t be able to trick-or-treat while doing so, but Scottsdale’s Salt River Fields Balloon Spooktacular is a sight that’s sure to alight the faces of your children as dozens of hot-air balloons take flight. With over 4,000 pounds of candy passed out, live music, a Kids Zone, a haunted house, and (post-balloon ride) fireworks; it’ll be a night to remember. It will probably the first time and only place you’ll go on hot-air balloon ride to celebrate Halloween.

While Williamsburg is normally a quaint, quiet town, for a few weeks between September and Halloween night, the city’s celebrated theme park, Busch Gardens Williamsburg, fills the fall air with screams with their “Howl-O-Scream” event, complete with haunted houses, live shows, and unrestricted creepy creatures hiding throughout the park.

You can also visit the locations of Williamsburg’s ghosts; including the ghost of Lady Ann Skipwith and the haunted home of Peyton Randolph.

If you’re in LA on Halloween and your friend isn’t dragging you off to get locked in an escape room, you’ll have plenty to do in the city, most of which will include checking out the marvelous costumes put together by people entirely too dedicated to their craft, including the Prohibition West Hollywood Halloween Costume Ball, the Hollywood Halloween Pub-crawl, the 10th Annual King Tut’s Tomb LA Halloween Party, and the Haunt Massive, which is called one of the most anticipated Halloween parties within the city. Don’t be afraid to splurge on a sexy costume and join in on the fun.

Where else to go?

Once you’ve hit some of these big US Halloween destinations; try taking your newfound joy for Halloween touring internationally. Check out what other countries do to celebrate Halloween, including our neighbors, Canada and Mexico. You can also try experiencing Halloween in some of the country’s small towns; or even some of the nation’s national parks. 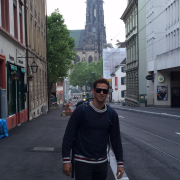 5 Road Trip Tips to Make Your Journey a Total Blast