When someone in North America, Europe or Australia says “hey lets visit India” then Rajasthan comes as top 5 must see places. It is because of its rich culture and royal hospitality which the locals have preserved for more than 1000 years.

As India has several magical tourist destinations and there is no doubt that one of the most attractive tourist places is of Rajasthan. It is needless to say that when you are looking for a vibrant holiday tour package for Rajasthan, there are 7 top Rajasthan destinations that you should place in your travel itinerary.

The Amber Fort is located in the small town of Amer which is now a part of Jaipur. The fort is located on a high hill and was built by the Meenas, an ancient clan from Rajasthan.

Amber fort was the residence and royal court of Raja Man Singh and is renowned for the Hindu style architecture along with its several gates and cobbled paths.

The fort is located in such a position that it overlooks the Maota Lake and was used as a war fort to protect the city from outside wars.

Today Amber Fort is a popular attraction in Jaipur for not just 5000 tourist who visit it every day but for directors from Bollywood (Indian Film Industry) and Hollywood.

The Jaigarh Fort is located atop a hill which is known as the Cheel ka Teela. It’s quite close to Amber Fort and also overlooks the Maota Lake.

This fort was mainly built by Jai Singh II to protect the Amber Fort. The fort looks very similar to the Amber Fort and is also known as the Victory Fort.

There is a cannon inside the Jaigarh Fort which is known as Jaivana. It was once the largest cannon on the wheels on planet earth but was retired as it not only destroyed the enemies but the one was was operating it.

I believe that one must spend 4-5 hours to properly explore Jaigarh and Amber fort and believe me, they are worh exploring.

The Deogarh Mahal is actually a fort that was converted into a luxury heritage hotel by the family members of the royal Deogarh family.

The luxury resort hotel of Deogarh Mahal is now considered as one of the bench marks of the Indian heritage hospitality industry in Rajasthan.

Plus if you stay here, then along with the royal hospitality, you must also go for a camel cart ride of the village and taste some amazing local cuisines.

The Taj Lake Palace at Udaipur is vintage site at its best resort in the world. It is located in the midst of the lake which gives it a marvelous hard to believe vision in real.

The luxurious hotel has the Aravalli Mountains and the city palace as the backdrop of the sight which is certain to make you feel enchanted to the core.

The hotel was once the residence of a king who was given a city with no royal heritage but his anger turned Udaipur into one of the finest city to explore in whole Asia.

I personally will skip Jaipur for Udaipur which isn’t a popular belief in travelers who are exploring Rajasthan. So just book a tour package for Udaipur and Mount Abu and explore the royal heritage of the Lake City of India.

The Sam Sand Dunes are located on the outskirts of Jaisalmer city and can be reached by jeep or even on a camel safari.

These dunes are the closest place from where you can explore the beauty of the great Thar Desert, rated as 18th largest desert in the world, even bigger than Great Britain.

You can explore the beauty of these magnificent dunes on a camel back, a trip to the desert national park to take photographs or some rarest breed of dears or can do some desert surfing as presented in the picture above.

The Gadisar Lake is located near the Tillon ki Gate. It is one of the most popular tourist destinations not just in Jaisalmer, but in the whole of Rajasthan. It is actually a huge water conversation tank that was designed in 1400 AD by Maharaja Gadsi Singh to make sure that his kingdom does not suffer for drought.

You can spot different migratory birds in the lake especially during the winters and there are also several temples & shrines around the lake which are worth visiting which is why it is also considered as a very popular Hindu pilgrimage spot.

Ajmer is located at the foothills of a high mountain which is home to the fort of Garh Beetli or Bithali.It was in Ajmer that Khawaja Mainuddin Chisti laid the foundation of Islam in India in 1192 AD.

The Ajmer Sharif Dargah shrine is actually the maqbara or the grave of the revered Islamic saint, Moinuddin Chisti. It is a pilgrimage that is revered by both the Muslims and the Hindus alike.

So that’s it. This is my favorite of the 7 top Rajasthan destinations but you can always explore amazing cities in Rajasthan and it would be great if you could share some names in the comment section. 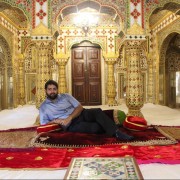 Jatin is the founder of Vidya Hotel Consulting & Marketing and an addicted traveler. His site Indian hotel consultant is a online hotelier community where he writes on various topics ranging from travel stories to hospitality management. Jaitin has worked some amazing travel firms like Makemytrip and now as a sole traveler he wants to explore it all...