Texas, the second-largest state in the U.S. –  also known as the “Lone Star State” – features a wealth of natural assets and cultural attractions. Geographically, the state’s south central location offers a wide variety of landscapes, from desert regions and caves to mountains, hidden canyons, and coastal scenery along the Gulf of Mexico. Texas’ world-class cities are also a big draw, and packed with tons of tourist attraction sites. Some Texas highlights include San Antonio’s superb River Walk; galleries and museums located throughout Dallas-Fort Worth, and Houston. I personally love Texas. The state has so much to offer, that it can, without a doubt, be difficult planning a trip that really takes it all in. Rather than trying to visit all that the Lone Star State has to offer in one trip; it may be better to break it up into multiple trips.

If you’re still skeptical after reading some of these Texas highlights, check out this list of spectacular places to visit. I dare you to try and stay away.

Perhaps one of the most popular wildlife areas located in Texas, Big Bend National Park is located in southwest Texas, on the frontier of Mexico around the great bend in the Rio Grande. This is where the national park gets its name. Having an altitude that ranges between 1,870 feet and 7,875 feet, it’s made up of three different zones: the valley of Rio Grande, Chihuahuan Desert, and the Chisos Mountains. Thanks to this diversity, the park is home to more than 400 species of birds. As a matter of fact, the national park has approximately 450 bird species, which includes golden eagles and roadrunners, along with 1,100 species of plants.

The park also boasts 240 miles of hiking trails; that range from the five-mile-long Lost Mine Trail to the 17 mile-long Window Trail through the Chisos Mountains. Some other great attractions are the three canyons on the Rio Grande – the Mariscal, Boquillas, and Santa Elena Canyons.
Advanced Tip: The best way to experience the park is by boat. While the isolation of Big Bend National Park is a big draw for many tourists; it also means that your trip must be well planned and executed.

Just off the coast, a few minutes from the center of Corpus Christi; the mighty USS Lexington is one of biggest surviving vessels to have served in World War II. This aircraft carrier was launched back in 1943 and now serves as a naval museum. Highlights include a large collection of vintage aircraft; as well as an opportunity to visit the bridge and crew quarters that detail the life of crew members who lived on the vessel.

Advanced Tip: Choose the four-hour Hard Hat Tour that takes you into the very heart of the amazing ship.

Stretching approximately seven miles around the San Antonio River, this spectacular walkway leads travelers right through the heart of San Antonio’s outdoor cultural activities, passing the city’s best shopping malls, restaurants, hotels, and famous attractions. Built directly below street level; the San Antonio River Walk is a verdant oasis of cypress-lined paved paths, arched paths, and walkways filled with lush landscapes. The River Walk is as popular to locals as it is with tourists, day and night. Perhaps the best way to tackle the attraction is to take a river cruise upstream and walk back to your starting point. Stop for a quick bite to eat or a museum visit along the way.

Advanced Tip: Try to plan your visit to coincide with one of the area’s festivals or popular arts and craft shows.

The Texas State Capitol in Austin

Just a little over 3 hours away from Plano, a city with the fastest growing job market is the Texas State Capitol. Built in 1888, is considered one of the finest state buildings in the United States. In the heart of downtown Austin, the building certainly impresses visitors with its dimensions, standing 308 feet tall. Highlights of its 22-acre park include famous memorials and statues to the defenders of the Alamo and to veterans of 1955, Vietnam War. Guided tours of the building’s interior are available to anyone interested and start from the visitor center with its many exhibits.

Advanced Tip: At dusk, head across to the Ann Richards Congress Avenue Bridge for a chance to witness a migration of a million or so Mexican-free tailed bats coming and going from their caves.

Advanced Tip: Some other popular Texas highlights include artifacts collected from Mercury, and Apollo space programs, as well as a chance to dress up like an astronaut.
Without a doubt, the Lone Star state should be on your list on places to visit. The sooner the better. Just remember to have fun while you’re down there and watch out for reckless drivers if you decide to drive yourself to each destination.

Thanks for the read! I honestly couldn’t cover every single place to visit, since Texas is such a big state. That’s where I turn to you (the reader). What are some other places you might suggest visiting, while exploring Texas? 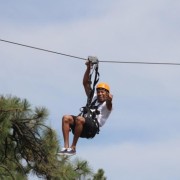 H. Davis loves taking advantage of the sunny weather outside. If you can’t catch him online, you might be able to catch him out playing football with friends or cheering on the Denver Broncos. Follow him on Twitter at @Davis241. Thanks!